Rani Mahal is a stately brick-and-mortar house designed in 1893 by General Khadga Shumsher to honor
his deceased friend, Tej Kumari. The palace is nestled on the top of a giant hill, on the banks of the
Kaligandaki Canal. Through this respect, Rani Mahal, or Queen’s Palace, has similarities with Taj Mahal
of India, which is also referred to as the Taj Mahal of Nepal. 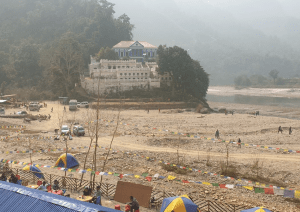 Ranimahal is perhaps the most prominent landmark in Palpa. But the palace and the ancient town of
Tansen nearby remained deep in the darkness, sandwiched between the glamor of Pokhara in the
northeast and Lumbini in the south. Moreover, owing to lack of adequate upkeep, the castle was at
danger of landslides and erosion. Also the most recent plans to renovate Ranimahal in 2016 is
controversial, with locals mixing up the usage of cement mortar instead of conventional construction
materials. The property of Ranimahal had been infringed as per the article found. In the middle of all this, how much of the mythical Ranimahal tradition exists today? And, yes,
is a ride to Ranimahal worth it?

Perhaps the best thing to tell about Ranimahal is that it has a peaceful feeling, surrounded by natural
opulence, and, of course, the architectural importance of the palace itself. Nirmal Shrestha, a writer, says
that the King had the intention to establish the palace as a holy center, similar to the Benaras of India.
But even as it stands today, the palace has enough attractions to please visitors, particularly those who
want to get lost in nature and enjoy history. “

The four-storey Ranimahal Palace, 56 ft long and 112 ft high, was designed on the basis of a synthesis
of European and neoclassical architecture. The prayer room of Khadga Shumsher is situated on the
eastern front of the palace. There are sitting rooms on the first level, although there are bedrooms in the
south. There are gardens and a pool around the palace. The stairs that start from the gate of the palace
run down to the Kaligandaki Water. Previously, the palace was the entrance for thousands of holy
visitors to the Muktinath Temple in Mustang, for which there is an ancient guesthouse. There is a herd
with horses and artifacts of the king’s rule. There are two ponds on the grounds, the surfaces of which
are intricately crafted. Ranipokhari is often used by others as a sign of love; hence, the palace sees a
number of couples every day.

HOW TO GET THERE: Tansen public vehicles are accessible from Pokhara, a 120 km
journey. It’s 65 km from Lumbini. Ranimahal lies some 13 km away from Tansen.

there are hotels and resorts in Ranimahal that can accommodate about 300 visitors.

Awal cave in the vicinity of Ranimahal is quickly gaining prominence. Observe rural farms in
the surrounding villages of Sutuka and Chherlung. Even, visit the Temple of Alamdevi.