Among the many 12 years festivals Nepal has, Lha Phewa (also spelled La Phewa) is the one that is celebrated by the Thakalis of the Thaksatsae region (collection of 100 villages). Lha Phewa in Thakali means “coming of the gods.” Another 12-year festival celebrated by the Thakalis is the Pomo Ama which is unique to the panch gaon (five villages), more specifically the Thini region. Lha Phewa is a big deal particularly in the Larjung, Kobang areas of Annapurna Circuit.

The four Thakali clans who live here are Gauchan, Tulachan, Sherchan, and Bhattachan. And they all have a deity and a temple of their own. Every 12 years these deities are taken out from their temple (known as ‘Lakhang’ which means god’s house) and are worshipped. Each clan has a priest of their own who is in charge of taking care of their god. For the entire duration of the festival each priest dresses in the color of their clan.

The journey starts from the Kathmandu valley from where the bus ride of about 5 to 6 hours will take you to the beautiful city of Pokhara. Through this ride travellers can enjoy the scenic views of beautiful river valleys, alongside terraced fields of barley and rice and over green hills blanketed with lush vegetation. When you arrive at the Pokhara valley there you will witness the beautiful lakes, hills and mountain ranges. The travellers will enjoy the evening here and stay here for a night.

The day begins with the fly between the snow capped pinnacles of Annapurna and Dhaulagiri to Jomsom. You can see the beautiful views of beautiful landscapes, canyons and Himalayas. From here the hike starts at Kagbeni  and there is a common checkpoint before entering Kagbeni. This checkpoint has been in this place from ages when trading between Nepal and Tibet used to take place.

The trail takes you towards the east bank of the Kali Gandaki River. The travellers have to cross a few edges to Tangbe town. This town is a maze of thin back streets among whitewashed houses, fields of buckwheat, grain, wheat and apple orchards. You can hike to the top of Nilgiri which rules the southern horizon of Kagbeni. After 2 hours of walk you will reach Chusang town. Then, travellers have to cross the stream and keep moving to an immense red piece of combination that has tumbled from the precipices above, shaping a passage through which the Kali Gandaki flows. You have to walk past the Kali gandaki valley and climb steeply up a rough channel to Chele.

Today’s trekking route will take you through the barren path, alongside the side of a terrific gorge to pass a stone cairn at 3540 metres. The path at that point makes a long slow drop to Samar town.  You can get the glimpse of Annapurna far toward the south of the region. The travellers have to move up above Samar to an edge and plummet into an enormous canyon. The route proceeds through another valley field, crosses a stream and moves up to an edge at 3800 metres. From here, you have to slowly move towards 3770 metres altitude and plummet into Geling Village.

The trail heads towards Drakmar through beautiful cliffs and green passages. Promptly leaving Ghami the path follows little fall and rising which takes around 45 minutes. You will arrive at the valley of Drakmar. There are a bunch of cliffs that offer views of the over town with vivid hillocks. Here travellers get an opportunity to see blue sheep while climbing the Mui La go at 4170m. Ghar Gompa is the most seasoned religious community of Nepal which was worked before Samey Monastery of Lhasa. This religious community is the Ngyinmapa group where the shrouded sacred writings of Padmasambhava were said to be found. From here travellers follow the  Tsarang Khola by means of Lo Ghekar as they reach Tsarang.

The trail ascends steadily until Lo- Gekar, Lo Gekar Gompa is older than Samye Gompa in Tibet. It is in fact, one of the oldest Gompas of the region. After visiting ti Lo Gekar , the hike continues to Mustang trek to Lomanthang. The route to Lomanthang is well defined with some minor climbing. From here, you have to pass the walled city of Lo along with the trail, then take a short descent, cross a stream and climb to the plateau of Lomanthang.

This day is for the travellers to explore the beautiful area of the Lomanthang. The area has remained untouched and unchanged since the 14th century. It consists of about 150 houses and many of them are Lama residents. There are four major temples within the area and one of these, Champa Lhakang, contains a huge clay statue of Buddha as well as elaborated mandalas painted on the walls . The king’s palace is an imposing building in the centre of the area and is occupied by the current King and Queen.

Finally, from the camp (Lo-Manthang) a short climb takes us up to a glacial valley with views of reddish brown historical wall city (the rain shadow zone) during the return back. From here we get an unforgettable image of the Lo. When coming up to the hill, if you want to change the route you have to go by the opposite side. Along the mountain ridge after one hour the trail descends down to the village of ‘DHI’.

The time is taken in between while streaming down. On the way, you will see the meadows of farming fields on the riverside. Then you have to cross a river to follow a path along the left bank of the riverside at Yara. From here in the dry season, the trail follows the riverbed but in the monsoon, it winds up the hills to a final steep climb to the top. It looks like a natural sand castle in front of you when you are atop the Yara hills. In some places, you will find a kind of salty dust like mineral on the hill.

Day 9 Visit to Luri Gompa and Back to Yara

This is the trail to the beautiful and stunning Luri Gompa which was established in the 13th century. It is also known as the Kagyukpa cave Monastery. There are brilliant composed Lama’s books. The route proceeds up to Duyung Khola which runs from the Damodar Kunda, this area is additionally popular for Hindu explorers. The headwater is a territory of land from where the water runs down into Kali Gandaki River. This where the dark ammonite fossils were discovered. Hindus and Buddhists gather these fossils to adore in their conviction that it is the encapsulation of God Vishnu.

The travellers will leave Yara along a high winding way. The route goes down to the Dhechaeng  Khola which runs from the Damodar Kund. The path crosses a little stream of melting ice water and afterward moves up for around one and half hours to DHI town along the winding desert mountain way to the Lo Pa town of Tangya. The occupants of this delicate strict gathering of Buddhism are for the most part occupied in neighborhood organizations; the little lower regions move away to remove skylines shielding the residents from the delicate breezes rolling in from the valley. From the town, you turn your face toward the north and we see some sandy precipices more than a few hundred years of age.  From this point you can locate the little town of Tangbe.

This trekking route is longer than the other days. The travelers have to climb some steps and cross over a suspension bridge following the trail to the right side. You have to come to the Yak Khola before climbing a terraced hill to PA at 4210m, it is the highest point of the Upper Mustang trip. The trail climbs for about two and a half hours then you summit on the top. It is a steep climb that covers your body with sweat.

From this point, you can get the glimpse of Damodar Himal and Saribung Himal in distance. The main trail continues along with the flat land to leave after one and half an hour walking. This leg of the journey takes another four to five hours total walking which is our target of the day. Now the trail descends and it is a rough way so we must be careful! Injuries can happen due to carelessness. Meanwhile, you are able to see right down the mud roof valley which is the destination of the day. This is the village known as Chhuksang or Tetang.

The trail continues to go up from where you can see Muktinath and the red painted Buddhist Monasteries. You have to drop down to the stream and cross by means of a suspension connect. Climb for some time and stroll through the towns to Muktinath. This course is exceptionally well known for the Fossil stone “Saligrams” which is fundamentally found among Tetang and Gyu La Pass (4077m). It likewise offers a stupendous 140-degree perspective on the Annapurna, Dhaulagiri and Tukuche Himalayan range.

Muktinath is one of the most important sacred pilgrimage sites for Hindu as well as Buddhists pilgrims. Travellers begin their day with a visit to Muktinath temple. From here you can appreciate the wonderful perspectives on Dhaulagiri.  There are water gushes which channel into the stream running over the sanctuary. There is additionally a Buddhist Monastery close by.  From here a path slides through the town of Jharkot where you can investigate the Jharkot religious community; this is both a Tibetan homegrown clinical focus and an old post. The hike proceeded back to Jomsom . The perspectives on the Kali Gandaki valley and Kagbeni town en route are genuinely overpowering. We pass by Ekle Bhatti and lastly show up at Jomsom.

The travellers will take a flight back to Pokhara.  The remaining afternoon can be spent exploring the beautiful landscapes, lakes and hills of the city. You can also roam around the market area of the Pokhara in the night and get yourself immersed in the limelight of the city.

It is time to bid farewell to the Pokhara valley and take a bus ride back to the Kathmandu valley. You can enjoy the beautiful landscapes, river valleys and clear sky through the window of the bus before reaching the city. 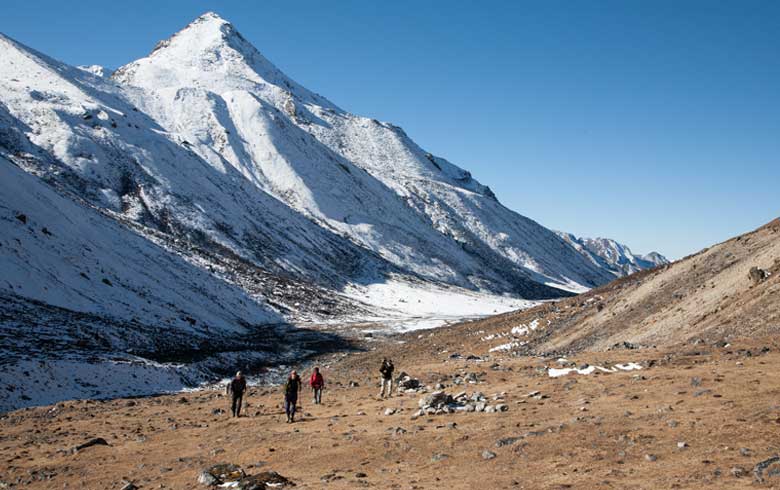 Opting the Kanchenjunga trek means signing up for the most…