Helambu is one of the trekking Himalayas. Once you reach there, you would never yearn to return back. It is 80km far from the Kathmandu .It is also known as the heart of Hyolmo people. The Helambu region starts from Lauribina La pass and return to Melamchi valley. Helambu is rich for its sweet and juicy apple. The valley is quietly occupied by The Buddhist Pilgrimage Place and the rich look monasteries. Those people who are fond of Trek and doesn’t have much time can reach out for Helambu Trek. At most it can take 8 days but can be finished in 5-6 days too. 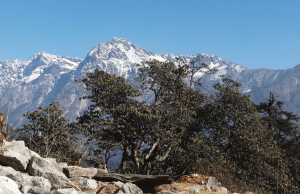 Starting at Sundarijal, the usual trailhead goes through Chisopani, Hyolmo, Kutumsang, Magin Goth, Tharepati, Malemchigaun, Nakote and Tarke Gyang. After that you have the choice of two paths one is the Sermathang footpath, or the Kiul Takpa Kharka bus line. Kashye in the end, all ways converge at Melemchi where you can take a bus back to Kathmandu  also another twist of is walk is the opposite. Throughout the trek the average height achieved is about 3650 m. The trek place form north east of Kathmandu. In other words, to be more definite it starts from Sundari Jal but some variation ways that go all the way through to Nagarkot, kakani or Sankhu.

Among the first villages to pass are Pati Bhanjyan, Chipling, Khutumsang and Tharepati, followed by Malemchigaon, Nakote and Tarke Gyang. There are two potential routes from Tarke Gyang, one to complete the trek and the other leading to the Arniko Highway, Kathmandu’s major road leading to Tibet. Following to Pati Bhanjyan to complete the trek one will lead to Taramarang. From Pati Bhanjyan the trek returns to Sundarijal starting point, a route which takes about seven days. There is scenic hike from Kakani to Tarke Gyang. The road climbs steeply through thick woodland for the first two hours of the walk. It’s a difficult climb, and most definitely it would leave you breathless and your limbs ache. Many seek the destination or hit the summit, ignoring that it is more necessary and humbling to immerse oneself in a new culture and atmosphere and appreciate the journey.

One can take public vehicles in the capital’s Aama Hyolmo bus park from Kathmandu to Timbu. A bus ride to and from Timbu City will cost roughly Rs 400 anywhere.

You can stay at their beautiful lodges with a homely environment where u can enjoy your life the fullest.

Traditional homemade aarag, hyolmo wine; a plateful of fruit and bhabar bread, known as derka; meat, thunse. The butter tea are is served when visiting Helambu during Losar. In addition, the Hyolmos grow, among other things, maize, potatoes, carrots, barley, wheat, lettuce, millet, apples and raise sheep, yak, and other animals. Quick every appetizing meal I had in the region of Helambu was organic and straight from a farm.

Hyolmo families are known to keep their houses’ interiors very clean, and decorate them in a special way. They also have an equally unique style of welcoming visitors-most families are swift to deliver a mug of butter tea to their visitors.